Before I start with this post, I want everyone to know that Iceland as a whole is such an incredible country, there truly wasn’t anything we did where we were left thinking “wow that was terrible” or “this was a waste of time.” That being said, I’ve done my best to be honest with you guys about my experience to help you with planning if you decide to visit this amazing place!

We had driven and seen the golden circle, and this was our last stop. It was about 4pm, it had started to lightly rain, and we were all a little tired after a busy day of exploring. We got out of the car and debated doing the hike because of the rain, but all in all decided it was worth it. Once we were about 10 minutes into the hike up the mountain, the rain got harder and harder. About a half hour into the hike our waterproof boots and clothing had stopped being waterproof and we were drenched and freezing cold (it was about 5 degrees Celsius). The hike took around 50 minutes to an hour up the mountain, and we even contemplated turning around because we were so wet and cold, but we were so glad we didn’t. We finally came up to the hot river and there were only a couple other people there because of the conditions. We stripped off our clothing as fast as we could so we could warm up in the water, which was as hot as a hot tub. It was a hilarious adventure that ended up being so much fun and an interesting challenge. I would recommend this to anyone who’s thinking of visiting this area. 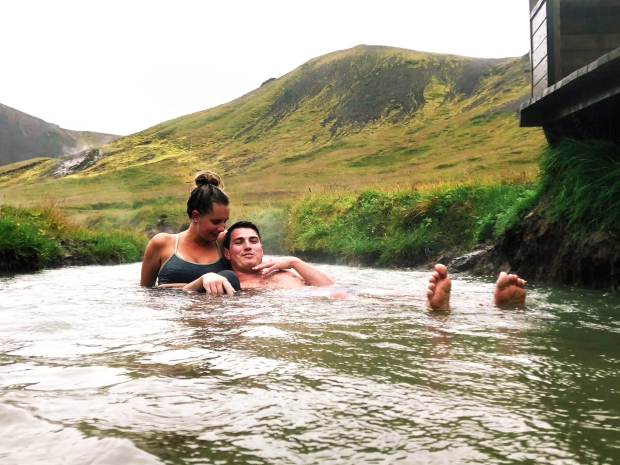 This opinion I’m sure can be considered a little controversial, because it is the biggest tourist attraction in Iceland, but here are my reasons.
First of all, this attraction is man made. Every single thing we saw in Iceland was beautiful and natural except this one, this was run off from the geothermal plant next door. We arrived at the spa around 1pm which is when our tickets were booked for, and there were A LOT of people. I understand we were there in the busiest time frame, but we stayed for almost 4 hours and it never got better. It was also quite expensive ($150 CAD) just to sit in a glorified salty hot tub with a drink and a face mask with hundreds of other people. We found the pool also very dirty. With the amount of people drinking and washing of face masks in the water, there were piles of slimy sludge in the far corners of the pool. I stepped in it accidentally once and was totally disgusted.

I’m thankful we did the Blue Lagoon on our very first day, because after getting off of the 6 hour flight we just wanted to relax. Doing it on the first day was also good because by the end of our 9 days, we had experienced a lot of different, free, and natural thermal baths which we enjoyed a lot more with way cooler views.
I’ve gotten a lot of questions from people asking whether this is worth it or not, but the answer is truly a matter of opinion. The Blue Lagoon is very much a tourist trap now, but if you’re looking for a relaxing few hours and have the money, why not? If you have a short amount of time and want to see the beautiful views elsewhere, I’d stay clear of this. 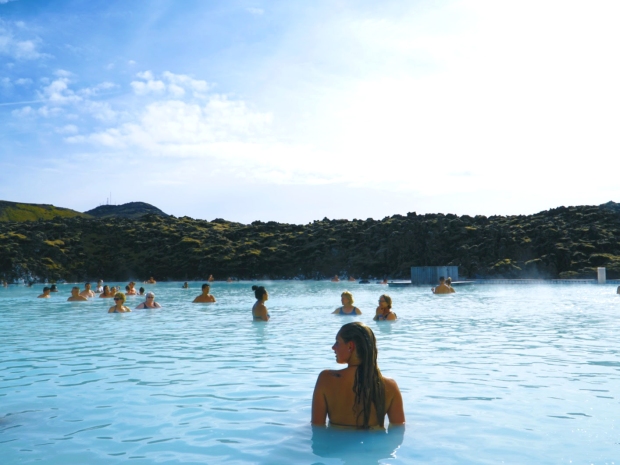 NOTE: If you are going to the Blue Lagoon and want to swim, make sure to put a conditioning mask in your hair. If you don’t have that, leave conditioner in it afterwards. If you can avoid putting your hair in all together do that. The silica in the water dries out your hair and leaves it feeling like straw for weeks. Mine never felt the same so I got 6 inches cut off when I returned.

BEST: WHALE WATCHING IN THE NORTH

I had gone whale watching before when I visited the East coast of Canada, but unfortunately had never seen a whale. We booked this tour with Salka Whale Watching, the staff were knowledgeable and you could tell they really enjoyed what they were doing. The first hour on the boat we only saw some jellyfish beneath the surface of the water, no whales were spotted. I was starting to think we were out of luck, when our guide shouted that she saw the back of one sticking out of the water. We got closer and for about an hour followed 2 humpback whales as they swam alongside one another and dove for food. There was also a minke whale that swam through. It was so amazing to be able to see these huge, beautiful creatures in their natural habitat and feeding spot. I would recommend this experience to anyone who travels to the northern part of Iceland (we were in the town of Husavik). Our tour was in the morning, so once we got back to the port we were getting pretty hungry. There was a great fish and chip place (it’s name on the sign is just Fish and Chips) that was SO tasty, and they had places to sit inside or outside! 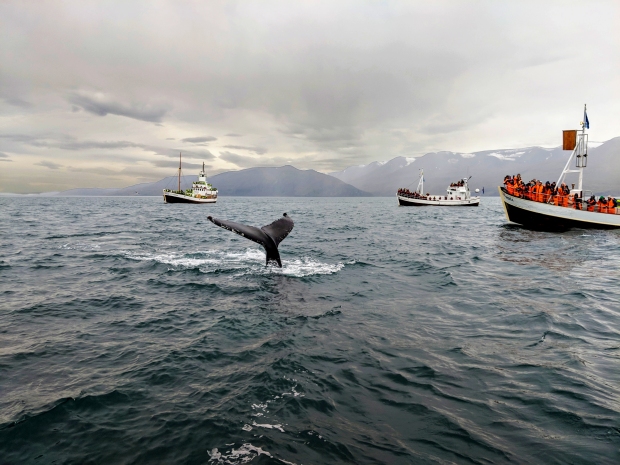 WORST: THE COST OF EVERYTHING

So you’ve bought your round trip tickets to Iceland and you’re surprised of how cheap the plane tickets are. What’s the catch? Well, the catch is that once you arrive in Iceland, everything including gas, food, souvenirs, and accommodations, is very pricey. This country is an island with very specific terrain that makes it difficult to farm a lot of different food. For this reason, most of the food is imported, as well as other resources, which puts it all at a higher price point. Not only that, but coming as a Canadian where our currency is not as strong, we were paying double or more compared to what we’d spend in our own country (example: minimum 2.80/litre for gas, between $300-$400 per night for hotels or Airbnb’s). I do believe a trip here is still 100% worth it, but if you’re looking to keep the price of this trip at a minimum, here are a few things we did.

First of all we travelled with 4 people, that way we were able to split groceries, gas and accommodations between us all which cut costs by a lot. We also only ate out 1 breakfast, 2 lunches, and 1 dinner the whole trip. Eating out was quite expensive, around $50-$60 CAD for any entree, not including a drink or anything else. We shopped everyday at their discount grocery store called Bonus, so we were always stocked up with snacks and ingredients for meals. When we would get to the Airbnb’s at night, we would cook our dinner and make our lunch for the upcoming day. I have never eaten so many sandwiches in my entire life. Lastly, we did want to relax some nights and enjoy some beer or a glass of wine after a long day of hiking and exploring. We purchased all of the alcohol we thought we’d need at the duty free shop in the airport once we arrived, which saved us a fair bit of money. 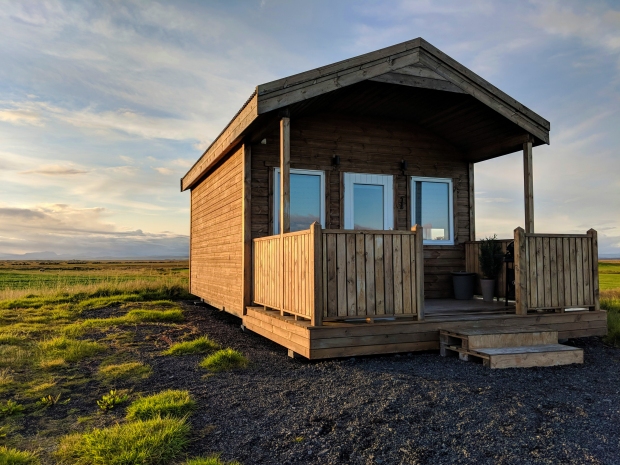 Our amazing little Airbnb we stayed in on the 3rd night

NOTE: If you’re looking for any other way to keep costs down, consider travelling to Iceland in the winter months. Their off season prices will be better than what we were paying in peak travel time.

I had seen photos of this area and was really looking forward to it, because I’d never seen anything like it. Once we got there I was truly blown away. The massive pieces of glacier that break off, the seals swimming around, the pieces washed up on the beach, it was all so surreal. We took a lot of time to just take it all in, walk around, have some lunch, and take lots of photos. If you’re looking to stay longer and have a cool experience, we saw a couple of boat tours happening that take you around the icebergs and up close to the glacier. We were also told by one of our Airbnb hosts that there is a really cool fireworks show at night around mid-August every year at this location. I think it’s worth a trip back just to see that. All round an amazing stop that should not be missed while you’re on the South coast! 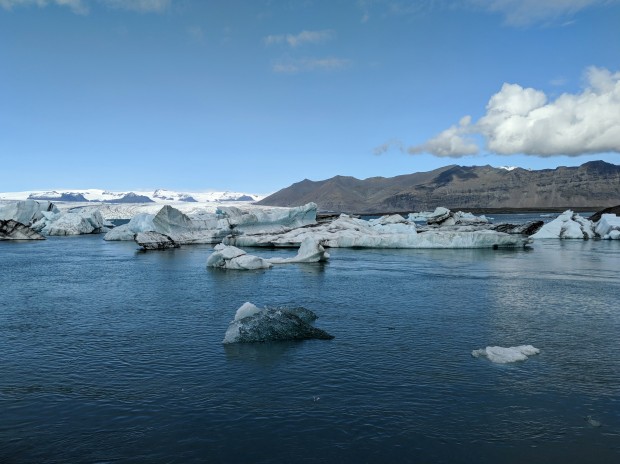 Iceland is definitely the most breathtaking place I’ve been thus far when it comes to landscapes. Every stop you make along your route will leave you speechless, from multitudes of waterfalls to snow peaked mountains. A couple runner ups for me were the Fjaðrárgljúfur canyon (South coast), and Snæfellsjökull National Park (West coast). If you have any other experiences you thought were the best of your trip, let me know in the comments! 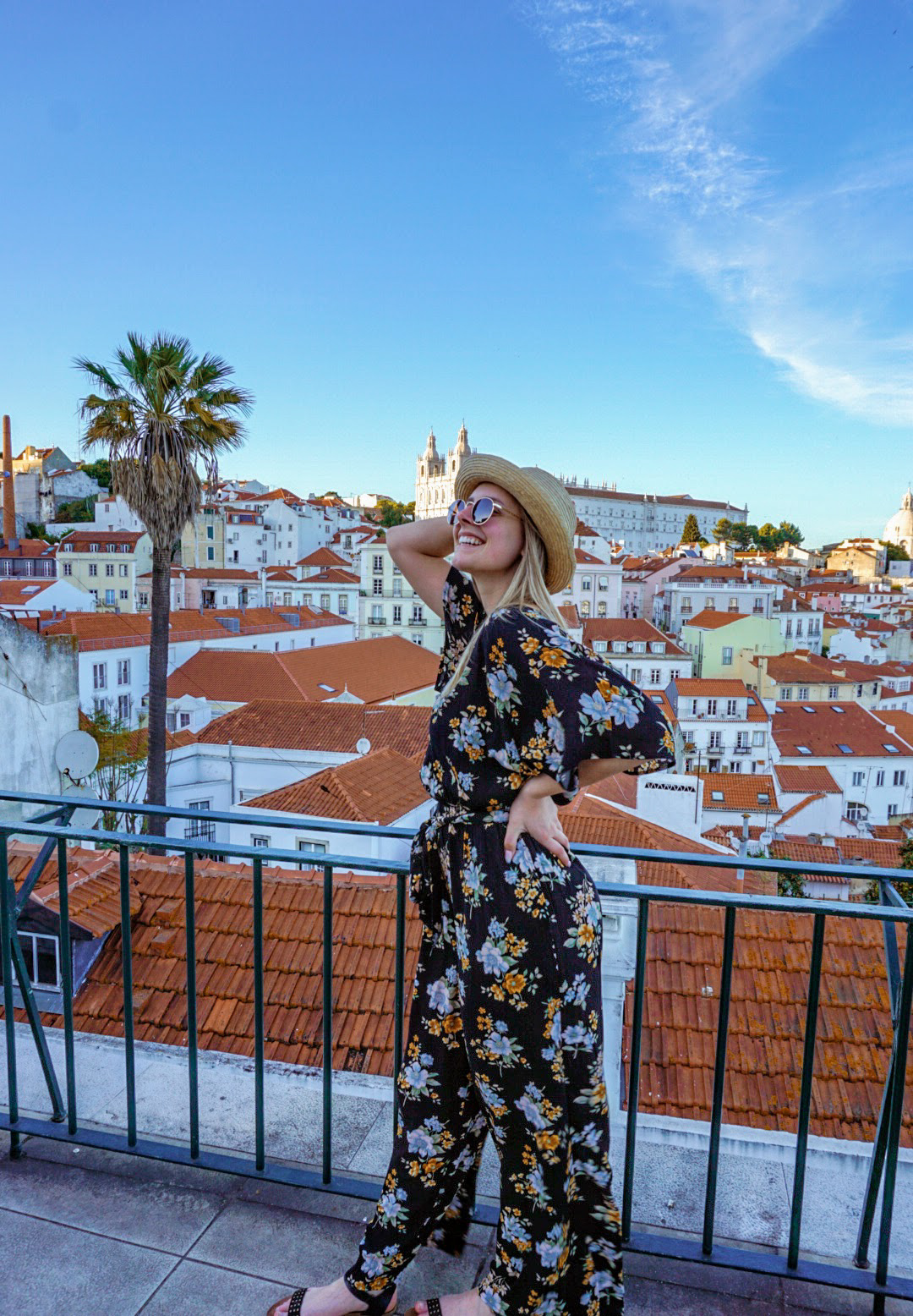 Dallas here! I’m a 26 year old from a small town in Ontario, Canada. I’ve been to 22 countries and counting, the majority all by myself. I enjoy hiking, photography, trying new food, a good book with a glass of wine, and of course TRAVEL. I hope you enjoy reading my posts for a small glimpse into my world of wander!